Although we are in 2013 since almost a month, the MSX-BASIC 2012 Contest organized by Konamito.com is still alive …. Actually, due to concurrence of other challenges, the deadline has been delayed to 28 February 2013 23:59 Canary Islands Zone (UTC) !

Knights & Demons is a puzzle-game, created by Kabuto Factory, a brand new Spanish team and that’s the 1st entry to this contest. In this nice game, the goal is to defeat the evil forces by replacing the dangerous demons by brave knights ! Three difficulty levels to prove your skills ! 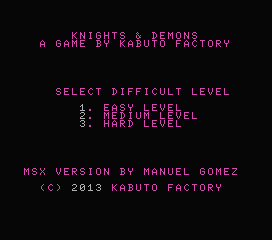 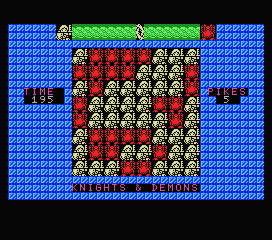 This game is provided in CAS format and a corrupted ASCII version of the BAS file is also available (problem with MSX Taper). Here’s the good procedure to create the DSK and ROM versions :
- create a blank DSK image with Disk Manager
- insert the DSK file in the virtual A drive of blueMSX
- insert the CAS file in the virtual tape port of blueMSX
- launch blueMSX (MSX1, 2 or 2+ machine) and press CTRL while booting
- enter LOAD”CAS:”
- save the file normally on DSK by SAVE “KD.BAS”
- create an AUTOEXEC.BAS to launch KD.BAS
- close blueMSX
- use ROM Creator to transform KD.BAS into KD.ROM