The MSX-BASIC 2012 Contest organized by Konamito.com provides us a fifth and last finished game !

Resurection is an action game, created by Dakar Soft, a Spanish team who invites us to contribute to the MSX revival by becoming the best vendor of MSX products and this way provoke a new MSX supremacy. 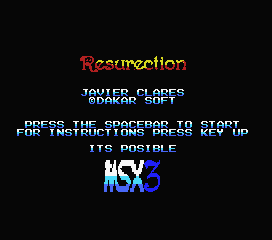 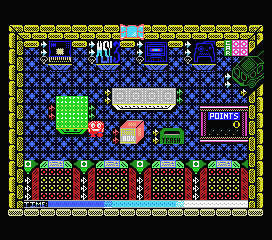 This game is released in CAS and DSK versions. However, the DSK is not clean (useless files, traces of erased files) and does not run the game automatically. Here’s the procedure to fix that before creating the ROM version :
- extract all the files with Disk Manager
- create a new blank DSK image with Disk Manager
- transfer on the DSK image the files in the following order : RESDSK.BAS – ROOM – COLOR – PANBIN – RESURT.BAS (the RES1.BAS, RES2.BAS, RES3.BAS and RES4.BAS files are not required for the DSK version)
- rename RESDSK.BAS as AUTOEXEC.BAS
- use DSK2ROM with the parameters -fc 1 to create the ROM version (mapper : Konami SCC)