Those are the results set by the jury. One of the judges left some non-commented categories in certain games, as he does not think it will be relevant or he does not want to highlight any specific point. All three reports have been computed in order to show the final results.

By comparison with previous editions, the games have still have been judged about 5 aspects, but more importance has been given to the gameplay. On 100 points, there were 28 points for the gameplay, the remaining 72 points were reserved for the 4 other categories (graphics/visuals, musics/sfx, originality, polish), what means 18 points for each of these criteria.

Anyway, we have a winner again ! Heroes Arena has seduced the jury’s members with its original approach including well-known and appreciated characters of the MSX scene. Not only it’s the big winner, but it’s viewed as the game with the best graphics and the most polished game.

Heroes Arena wins also the special prize offered by a sponsor for the best MSXdev’10 game for (at least) 2 simultaneous players ! Congratulations to Imanok for this fantastic game. The winner, and the ones that have obtained other prizes offered by sponsors, will be contacted soon.

Besides, Heroes Arena is also a masterpiece in the originality, but here, it shares the victory with the astonishing Zombie Near, the first MSX game developed by a Mexican coder, winner for the 2nd prize, certainly a fantastic source of motivation to develop other surprizing games !

The 3rd prize goes to Hans’ Adventure and its very special atmosphere. Also the sign that a team can start from MSX-BASIC and evolve to Assembler, when they are really passionnate and have excellent ideas !

A special mention goes to QBIQS, a great tribute to Quarth, one of the last games published for MSX2 by Konami. You have here a MSX1 version with the best musics and the best gameplay for this 2010 edition of your preferred challenge !

Now sit back and read the in-depth report for all 8 entries presented to the contest ! 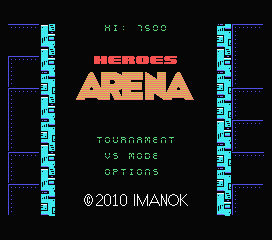 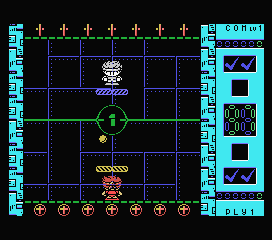 - Colourful cartoonish graphics in the purest japanese SD style, smoothly animated and plenty of interesting effects, such as the different “special attacks”.
- The work on the graphics is impressive, really adapted to the spirit of the game.

- The music is entertaining, dynamic, not boring !
- In-game music adds the challenge feeling and sound effects are rich and varied. Wise use of the PSG with clean tunes reminds classic japanese games from the 80s.

- Some sort of Arkanoid / Pong hybrid. But different.
- A game heavily inspired in Neo·Geo Battle Flip Shot but with a neat MSX theme twist. Indeed, it is just a Pong game. But what a Pong !
- Brilliant concept, mixing different games in a new challenge with surprising events !

- Almost perfect, only a demo mode is missing.
- Design-wise, the game is perfect in every aspect. Some in-game instructions or demo would be appreciated, but some trade-offs are required to pack the whole game in only 32 KB.

- Quite addictive and very fun to play. Difficulty curve has been thoughtfully implemented for 1P vs CPU modes. The tournament mode makes it a great option for any MSX meeting : up to 8P action !
- With all its options, this game is very addictive, even if you play alone !!!

- MSX well-known characters in an amazing mix of Pong and Break-Out !
- This game would have been a best-seller cartridge in the golden ages. One of the best 2P games for MSX ever ! 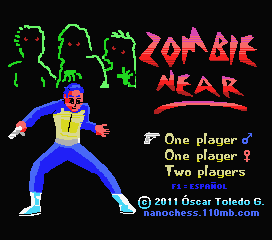 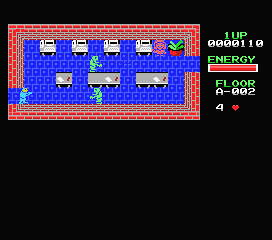 - The graphics are great, especially the sprites ; the big bosses are scareful !
- Colourful and well defined in-game graphics, although main menu and intro graphics are a bit rough.

- Metal Gear in Rambo mode and with a 2 players mode, that’s very original !
- A perfect mix of maze and arcade convert this game in a great adventure. Extra kudos for the zombie theme !

- Animated intro and bilingual English-Spanish support, translating even the main menu and intro graphics, but with some grammar issues in English (just like some classic japanese games).
- Good intro and info screens between some parts of the maze.

- Dungeon crawling, zombie shooting/avoiding action adventure.
- The game concept is a very simple one: find the survivors, keep advancing and survive, but it really works. It makes me want to play again and again.
- The playability is good, very fast reflexes are required against some enemies !

- If you like fast action in a giant maze, you can’t miss this game !
- A very playable entry, technically well done, with remarkable split-screen 2P mode without interaction. Excellent game and thumbs up for the newest MSX-republic : Mexico !
- Shoot zombies while trying to save survivors and yourself. What is there not to like ? 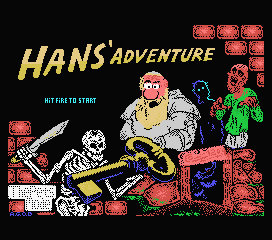 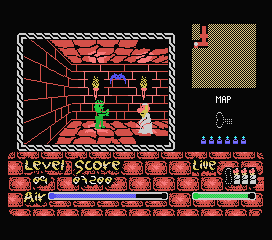 - Colourful graphics with big sprites and detailed backgrounds, but somewhat inconsistent with the intro images.
- The graphics create the specific atmosphere of the game !
- Very nice looking, main character could have done with some more animation.

- Explore an underground maze, collect the key, find the exit, dodge the enemies, sounds familiar? But very well done and with nice details everywhere.
- A new approach for games with escape as goal !

- The game comes with a nice intro and a very nice end.
- Complete intro and plenty of details make of this game a very polished entry. When the game is over, do not miss the small vignette with Hans lying down.

- Interesting concept but action soon becomes repetitive: look for the key, find the exit. Despite the additional enemies and level configurations, every maze is pretty much the same. The difficulty curve should be steeper than it is.
- Good playability with intelligent progression in the difficulty level … The skeletons require good reflexes !

- A good combination of memory game and action game.
- Very polished game, solid in every single aspect and with a professional finishing. It is full of a refreshing European style. 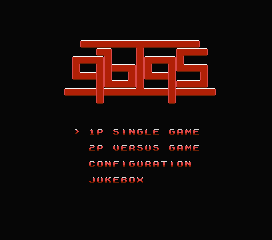 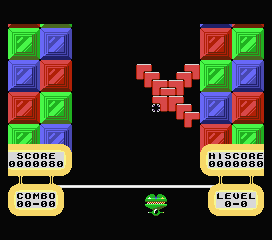 - Great graphics for a game of this type, colourful and detailed. Everything moves smoothly!
- Bright and cheerful.
- Very good work with all the graphics, especially the sprites !

- Really impressive musics and good samples !
- The in-game tune is fantastic, as well as the sound effects. Do not miss the graphical equalizer in the jukebox.

- It is Quarth. For MSX1. Better looking than Block Hole.
- The concept is not original, but it’s used differently with the combos feature.
- Despite the background history twist, it is a remake of the classic Konami game for first generation MSX computers.

- Polished entry with configurable options. Main menu logo and navigation system feels somewhat less detailed than the rest of the game.
- High quality work, with even a demo showing the 1 player mode and the 2 players mode

- Fans of moving puzzles will enjoy this game, fast thinking and reflexes are required !
- Very playable indeed. Seems a bit more difficult than the games it is based on.
- Highly playable action puzzle game with increasing difficulty. 2P action makes it even more interesting.

- If you are looking for the best MSX1 version of Quarth, look no further !
- A technically impressive game with very good playability and complete 2P action modes. It surpasses in every single aspect Zemina’s Block Hole. In fact, the game as it is could be an excellent coin-op arcade.
- Game inspired by Quarth …. A perfect tribute to Konami MSX game ! 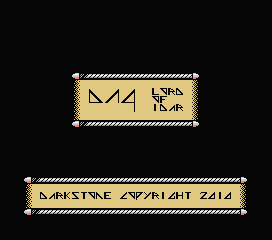 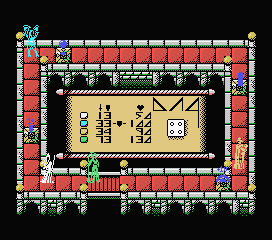 - Very nice game effects and some short jingles, but no proper BSO included.
- Good diversity in the sounds, but the dice sound is too repetitive ….
- Hardly anything.

- A dice-rolling boardgame RPG adventure.
- You don’t encounter every day a board game with RPG elements !
- Board game with an interesting story and an original development.

- Polished game – Darkstone has paid attention to details, but the annoying keyclick is unforgivable.
- RPG touch with battle mode and unpredictable events !

- Easy to pick up, just press the spacebar at the right time.
- This game is very well conceived, but you need to like this kind of game as it’s very long to come to the end !
- The player just has to press button to roll the dice – the concept is too limited to be played in the long run. When there are only two players left on the board the game becomes an uninteresting turn-based chase.

- To get the maximum amount of fun out of this game, you need to be with 4 players.
- Technically nice game in which the selected programming language does not affect the quality of the result. The limited gameplay options affect the final score of the game, so I’ll wait for the second part.
- A nice way to discover again the fun to play board games. More players, more fun ! 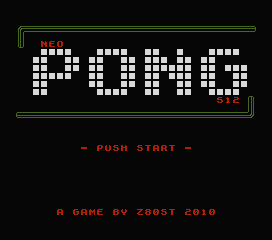 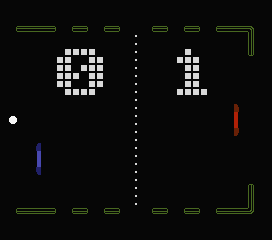 - Powerful graphics ! Nice effect when the ball is in contact with the border.
- Nothing spectacular, functional and easy on the eyes.
- Simple retro graphics, uninteresting sprites, nice colour transition when the wall is hit.

- It is Pong.
- The originality lies in the random wall change, with so many possibilities !
- It is just another PONG with some interesting ideas : random walls, accelerating ball.

- Solid and effective game, although aesthetically it is neither retro nor revolutionary.
- Good enhanced version of a great classical game !

- Excellent gameplay but you need absolutely to find a second player !
- Well known-concept, great fun for 2P, but it lacks the 1P mode against the CPU.
- Smooth and due to accelleration quite frantic gameplay. For 2 players only. 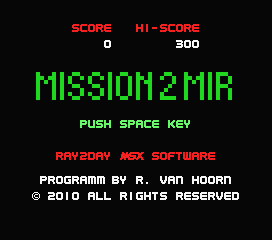 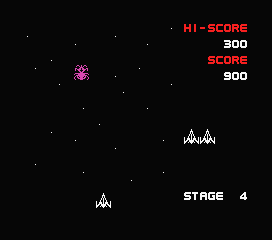 - Nice work with the sprites and the changing background !
- Single colour sprites with no animation and fixed-depth starfield, but very nice font and overall visual design.

- Hardly any, but not awful or annoying.
- Two basic in-game sound effects (shot and explosion) and two short jingles (level start and game over).
- Good sound effects for an intelligent shooter !

- Good concept in MSX-BASIC : a light version of Space Invaders with accent on speed and strategy !
- Another vertical wave upon wave shooter.
- Simple shot’em-up without fresh ideas. Kill them all. You cannot trust those aliens !

- Clear and solid look, consistent style and well finished, but nothing remarkable.
- Nice effort in MSX-BASIC !

- Slow paced action, fixed game concept, unresponsive controls and blocky movement make this game not very playable.
- This game is amazing, as the moves of some enemies are really erratic, unpredictible and nasty !
- Slow, jerky controls make it nearly impossible to play and like for more than 5 minutes.

- The Invaders are back !
- Again, a big effort to code in BASIC an action game that needs speed in order to become playable and interesting. 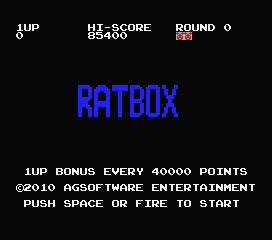 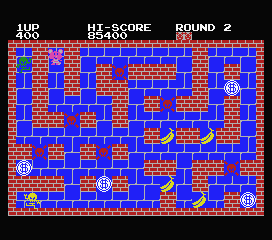 This game has been disqualified as it uses ripped graphics : the main character has been taken from Matra’s Sex Bomb Bunny, the skeletons are from the dead sequence in Casio’s Hadesu no Monshou, the coins and the bananas come from Konami’s Pippols.

As the game is disqualified, you can read below only the comments. It does not have any sense to provide the scores !

- Whatever sound there is hurts the ears.
- Some basic in-game effects and a noisy end-of-level chirp. Sometimes sound hangs. There is also a very annoying hum in the background while playing. Key click remains enabled.
- Different sounds, the best one is at the end of each level.

- It is more a strategy game to avoid traps and enemies and get a maximum points than an action game !
- I have seen and played loads of games like this back in the day, this one does not add anything new.
- Simple concept: maze, monsters, collect items. Very similar to previous AG productions.

- Long time to dump data to VRAM, frequent bugs and glitches during gameplay.
- Probably the best effort in MSX-BASIC by AG Software !

- You can enjoy this game, but after some time, it becomes boring, because always the same 5 levels come again.
- Slightly slow/jerky controls. Gets boring very quickly.
- Very slow action, simple gameplay, dumb enemies and only five levels in an endless game with no difficulty curve at all. Short lived production.

- A big effort to code in BASIC an action game that would require speed to become somewhat interesting, although being visually pleasing.
- A good impression for a MSX-BASIC game !