Congratulations to all contestants of the Karoshi BASIC competition. All entries are quite fun to play and some funnier to watch as the random behaviour can make the game impossible to play. These results are final. The jury will not take part in any correspondence regarding these results.

The totals are calculated with the following formula, in case anybody wants to double check things: the average of the scores minus penalty points. Regular points are given like this : 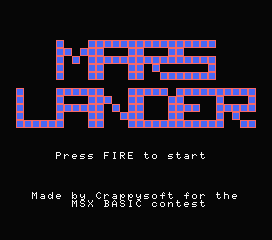 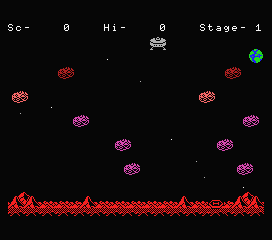 Comments :
- Three civilisations are competing in the race of Mars exploration. Guiding your ship through the moving layers of meteors is quite smooth.
- Sound effects in all the right places and graphics are well enough to play with.
- The selection of the civilisation you want to have explore Mars is way too fast and strange enough the hi-score is actually reset when a new game starts.
- The BASIC is structured, but some of the graphical characters might cause problems when the BASIC program is published in a magazine. 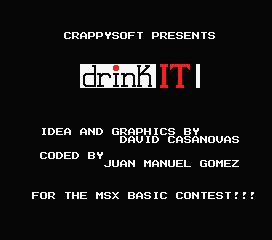 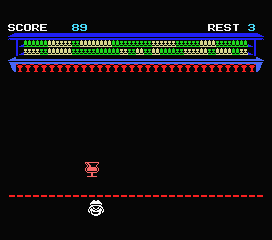 Comments :
- One of the craziest game I ever played. I almost thought you’d need to drink from the toilet as well, but then the manual explained the idea.
- A bit strange is not to go to the top scores after you’ve entered your name.
- The BASIC is structured, but some of the graphical characters might cause problems when the BASIC program is published in a magazine. 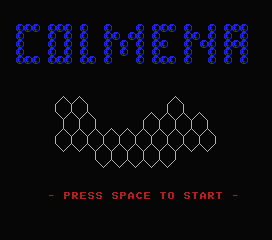 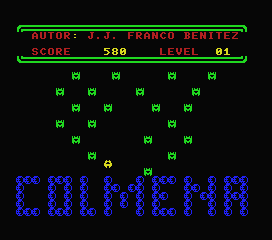 Comments :
- Static Space Invaders sounds easy, doesn’t it? It’s a long way to the finish.
- Although in Spanish, the BASIC is well commented.
- The controls are very uncommon as they use the < and > keys in stead of the more common cursor keys. It can be a bit annoying when the beam shoots through a martian when the screen scrolls.
- The BASIC could perfectly be published in a magazine. 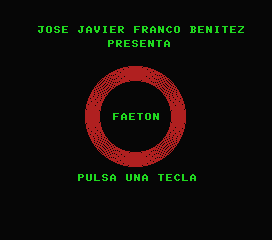 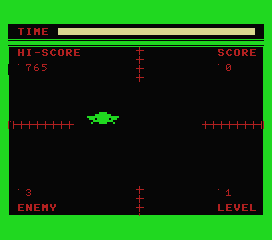 Comments :
- Usually 3D games on MSX aren’t my thing. This game caught my attention with its gameplay.
- The somewhat jumpy random can make you nuts sometimes, though most of the time the game is pretty normal.
- The horizontal beam is original.
- The PSET to locate the texts on the graphical screen can also be done with a PRESET or DRAW to make the pixel invisible.
- The BASIC could perfectly be published in a magazine. 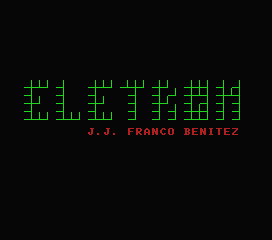 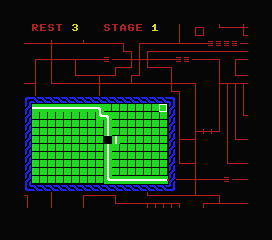 Comments :
- Control the way of the electron. Strangely enough the electron doesn’t move with the piece when the piece is moved.
- Some of the graphical characters used might cause problems when publishing this BASIC program in a magazine. 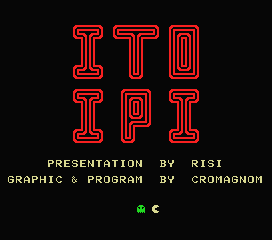 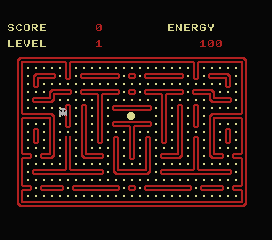 Comments :
- Pretty original to have the ghost follow you through the walls as well.
- The lifespan is controlled by an energy meter which decreases when the ghost touches you. Because of that I would’ve expected the fruits appearing in the maze to restore (part of) your energy.
- There is a minor glitch in the maze and the intro screen keeping the color of the last played stage.
- When the intro is running for a long time it results in an “Overflow in 1700″ error.
- Some of the graphical characters used might cause problems when publishing this BASIC program in a magazine. 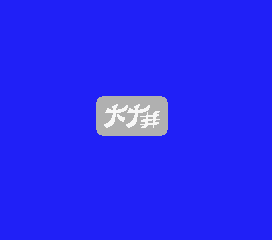 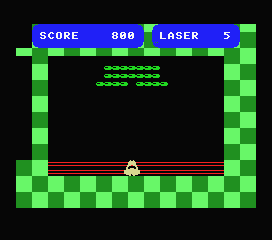 Comments :
- Another Static Space invaders. This variant requires you to shoot each and every one of them. This seems difficult, but once you get to know it, it gets quite addictive.
- It starts without sound when you shoot an enemy. Later enemies do have their own sound.
- In the laser area there miss a few pixels. It can be a bit annoying when the beam shoots through a martian when the screen scrolls.
- Some of the graphical characters might cause problems when the BASIC program is published in a magazine. 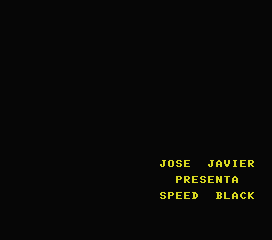 Comments :
- The intro is pretty boring. The game screen compensates that though.
- The scrolling is quite natural. I especially like the bouncy effect at the sides.
- It takes quite a while to get through the first level and this caused me losing interest to finish it.
- When the game is over, it asks if you’re ready. I would’ve expected the Yes to restart the game and No to return to the intro.
- The BASIC could perfectly be published in a magazine. 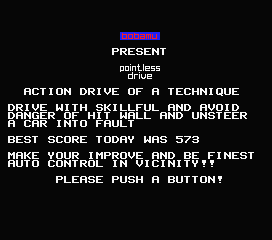 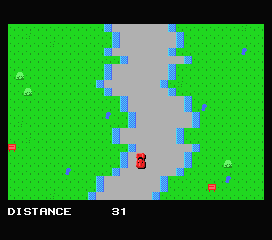 Comments :
- Simplicity in every way. A game with a car shouts for an engine sound though. Only a crash is audible.
- There is a glitch in the top right of the screen when the gamescreen scrolls, the distance is printed when it’s first updated and the 2 to the left and 2 to the right road ‘jumps’ are bound to cause a crash when they’re generated too often.
- The BASIC could perfectly be published in a magazine. 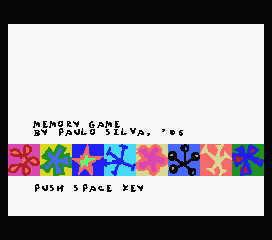 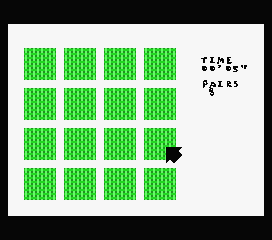 Comments :
- The entire game is a bit incomplete. It lacks sound completely, controls are somewhat shocky.
- Some music when starting the game and some effects while turning cards and removing a pair would make it more complete.
- The graphics could do a bit better with this mode as well.
- The BASIC could perfectly be published in a magazine. 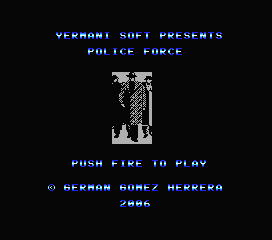 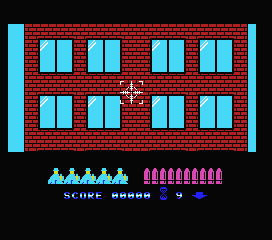 Comments :
- An appartement complex filled with gangsters. Fast scrolling, nice graphics and nice sound.
- Gameplay is smooth and not too predictable. The music volume increases to increase the tension.
- The scrolling does show glitches in either the upper-right or the lower-right corner of the game screen depending on the direction of the scrolling.
- Some of the graphical characters might cause problems when the BASIC program is published in a magazine.
- This game has got a penalty for disk requirement to create a GRP file to load in VRAM later. 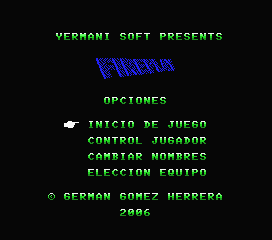 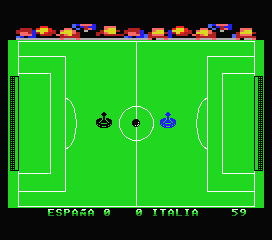 Comments :
- Soccer isn’t my type of game, but this one is slightly different. 1 on 1 pawn-type playing, which is somewhat more original than the common one.
- It also has a replay mode to repeat a goal. Something which isn’t done too often on MSX.
- When I want to select in the menu, it takes a while for the pointer to move as the music plays. I also miss an option to play as other countries.
- Some of the graphical characters might cause problems when the BASIC program is published in a magazine.
- This game has got a penalty for disk requirement to create a GRP file to load in VRAM later. 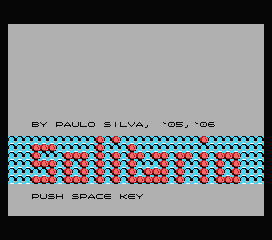 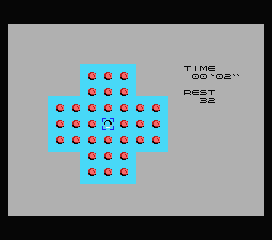 Comments :
- 33 positions, 32 pawns and the goal to do jumps until 1 is left.
- Even though the graphics are nice, they could’ve been souped up a little more.
- It completely lacks sound, which is a pity. There are a few moments sound would make it more complete.
- Enabling the automatic check for possible moves slow down the game. On an MSX1 this really isn’t fun.
- A few minor things which aren’t done because maybe the game will slow down are keeping the cursor in the playfield itself and check whether the selected pawn can move.
- A really strange thing is the number of pawns left isn’t checked with the hiscore list, which means you will always be asked to enter your name, even when it doesn’t end up in the list.